Reverse-searing has taken over the grilling community, for a good reason. Practically fool-proof, this process of slowly cooking steak and searing at the end give provides edge-to-edge medium rare beef with a crispy crust on the outside. Steaks are tender, roasts are juicy, and you’re the hero.

This is one of the best ways to cook a thick steak or roast.

Chefs traditionally sear their steaks in a blazing hot pan or skillet, finishing them in the oven before reaching the ideal temperature to serve. Classic, and challenging, as the timing in the oven has to be perfect. You may still see grey edges around the outside or worst yet, accidentally overcook the steak from being in the oven a touch too long.

Sous vide has come to the rescue, allowing a precise cooking process to practically make overcooking the meat impossible. Vacuum-sealed steaks are placed in a water bath for a specific time and temperature, cooking the steak slowly without losing any moisture. The lack of moisture evaporation provides an incredibly tender texture on the inside, also providing a challenge for creating a crispy crust on the outside when it’s time to sear.

Reverse-searing uses a combined strategy of traditional methods and sous vide. Slowly cook thick steaks in your smoker or grill, and then finish it off over high heat. The only real decision you’ll need to make is whether to finish the steaks in cast iron or directly over the flames.

Why Should You Reverse Sear?

The process is very straightforward and broken into three main stages: Seasoning, Cooking, and Searing. You’ll season the meat and allow the spices to penetrate through, slowly cook the meat over a period of time, and then finish it off over high heat. Let’s break down each of the steps.

The first step seems straightforward, but there’s always a trick. You’ll want to season the meat and dry-brine it for a period of time. Keeping the meat in your fridge on a wire rack, uncovered, is the biggest key to start.

Dry-brining is the process of seasoning the meat ahead of time to infuse it with more flavor, and to create a dry outer surface which helps promote a crispy crust in the end. I highly recommend investing into a large baking sheet with a rack, specifically for doing this at home. You’ll be using this same method for ALL meats, including whole chicken, turkey, pork, chicken wings, and more.

The time required for dry-brining depends on what you’re doing and the size of the meat. Smaller cuts that you’ll cook for a shorter period of time and searing on the grill won’t take much longer than an hour or so, and larger cuts like the Prime Rib above need to dry-brine overnight.

You’ll want to choose your weapon of choice: oven, grill, or smoker. Reverse-searing works the same in each, meaning that the meat will cook at a very low temperature for the first phase. Cooking on a grill means that you’ll need to set up a 2-zone cooking area, giving yourself the ability for indirect heat. Smokers and ovens are straightforward, set the temperature to a lower temperature between 200-250°F.

The lower the temperature, the more even the internal temperature of the meat, and it will take longer to cook.

Smoking the meat will add another dimension of flavor. Lower temperatures will also create more smoke, as the wood tends to smolder more. Use wood chunks or chips on your grill if you’re cooking indirectly.

Place the meat directly on the grates of your smoker or grill as planned. Using an oven, I would recommend placing the entire baking sheet and wire rack you’ve used to dry-brine right into the oven. Meat on the grates or a wire rack will allow for the best airflow possible.

I’ve created this chart below to help you with reverse-searing. The left column shows the temperature you’ll be cooking to while in the smoker or oven, based on how you want the end results to be on the right. Note the picture above with the beef filets, they are at 115°F and ready to be seared to a medium-rare.

Accuracy is incredibly important for this process, so use the right tools. Most of us in the barbecue community are familiar with Thermoworks, but if you’re looking for a more affordable option I’d recommend Lavatools as well.

We’re almost at the finish line! Searing the steak is the most fun. This is where everything comes together.

It’s important to note that if you cooked your meat in the oven, yours will not be bright red like the photos above. Likely, it will be quite grey in color. Do not be scared! It’s not grey on the inside, just the outside. Trust me on this, and trust your thermometer.

Time to discuss the two main ways to sear off the meat. Searing only takes minutes, you just need to build the crust. Remember you’re not trying to cook the meat so use very high heat for a quick sear!

Watch the temperature as you sear. It’s easy to get into the habit of cooking a steak traditionally and forget that all you really need is to develop a crust.

Resting doesn’t take long, we only need a few minutes. This is the best part, where you slice into your hard work and its wall-to-wall medium-rare. Or, whatever color you were going for.

There’s one important thing to know, most guides on the web don’t share this fact: You will likely see a smoke ring if you’re reverse-searing a larger cut of meat. The color is going to be different than if you were to cook it in the oven.

Look at the examples, the filet above was cooked in the oven and the tenderloin below was cooked in the smoker. There’s a glowing red ring around the outside of the tenderloin, with the slightest gradient before you get the pink in the middle. You’re not doing anything wrong if you see this on your steaks or roasts, this is a symptom of smoking the meat.

How else can I use Reverse-Searing?

So glad you asked! We’ve covered the basics which equipped you for the perfect steak.

You can also use this for different cuts, such as a rack of lamb. The internal temperature is going to be lower, typically 125-130˚F for serving (see picture below). The smoke flavors really compliment the natural flavors of bison, goat, lamb, venison, and even ostrich. Pay attention to the optimal serving temperatures for the various cuts of meat and have fun with the process.

You can even use the reverse-searing process and finish your steaks with toppings. See this Parmesan-Crusted Steak recipe for a seared finish in a pre-heated cast iron skillet, topped with a creamy mix.

When is Reverse-Searing Not the Best?

Here’s the most common question, so I wanted to break this off in case you’re thinking the same thing. Any time you have a steak that’s generally less than about 1.5″ thick, reverse-searing is not necessary. Really. I’d highly recommend learning to cook your steak over high heat, flipping often, and basting as needed.

There’s one major caveat to that rule, which is if you’re cooking a lot of steaks as once for a group. I’ve found that smoking 6-8 steaks to the recommended temperature and searing them is quite helpful just for the sake of saving time. Does it greatly improve the steaks? No, but it sure makes it less stressful.

Is the timing different if I use an oven?

Check your oven to see if you’re using a convection oven or a conventional oven, which could definitely affect the timing. My advice is to cook at a lower temperature, such as 200˚F.

How long will it take to cook a large roast?

Practice will give you the answer, or you can look on the website for recipes that match the cut you’re looking for. It will depend on the size of the cut, and the temperature you’re cooking with.

Do I have to rest the steak before I sear?

Definitely not, you can go ahead and sear immediately. The more you practice you’ll be able to time the entire cook down to a small window of variance.

What temperature should I reverse-sear to?

Use the chart above. My general advice is to smoke/cook your meat until it’s about 15˚ below your target temperature.

Are you digging this food? Don’t stop now! 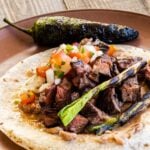 A Guide for Carne Asada Tacos 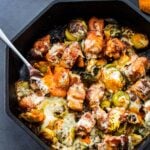