Smoke the ham a second time

Twice smoked ham, it’s absolutely worth all of the effort. Yes, it’s true, you can pick up a ham from the store and it’s already cooked. Yes, you can open up that storebought ham and eat it right away. You’re here today because you have bigger dreams though. Sweet & spicy twice smoked ham that’s dripping with caramelized flavors. Don’t just reheat that ham, let’s smoke it again and add a personal twist! Plus, tequila.

What makes the best ham? Well honestly, by the time they are cured they are pretty much all the same. Except the ones from Omaha Steaks. The spiral hams they create are still cured, but they are MUCH less salty than any other ham I’ve ever tried. They tend to be a little on the sweeter side, which is absolutely perfect for adding my own layers of flavor. I highly recommend it, especially if you have family members that might be sensitive to high levels of sodium, or have high blood pressure.

These are clearly Mexican flavors coming together to bring you a delicious smoked ham. Let’s talk about how we layer the flavors together:

The achiote seasoning is a base flavor to season the ham with during the smoke process. You don’t need very much salt in this mix as the ham is already cured.

There are two ways to go about this:

1. Make an achiote seasoning blend. You’ll use this same blend on all sorts of meats or vegetables, but you may not have everything on-hand. Here’s the breakdown of the recipe:

2. Buy a premade rub. This is always an option, and believe me, there’s a delicious one. Spiceology sells an Achiote Blend that is fantastic. I feel the need to point out that their blend uses MSG, so if that’s not your thing just please be aware.

I didn’t forget about the tequila. This tequila achiote glaze is something you’ll want to make about halfway through the process and have it ready. You’ll apply the glaze after the ham reaches 140°F, and then pop this in the broiler for some bubbly caramelization. Twice smoked ham with tequila… how wonderful does that sound?

Toss in all of the ingredients together in a small saucepot and cook until it boils. You’ll have to stir throughout to make sure the sugar doesn’t stick to the bottom. Prepare for the house to smell amazing!

Maybe this ham doesn’t fit your Thanksgiving or Christmas theme, but you’ll definitely want to try it. The ingredients are definitely Mexican-inspired, but after biting into that crispy, smoky jewel of pork you’ll realize it’s just damn delicious.

We serve it with Crispy Roasted Acorn Squash, which is just one of the best combos. Go check it out!

Don’t be afraid to mix up the flavors, use different citrus juices or chile powders. I highly recommend the Achiote Rub from Spiceology if you don’t want to make your own, but want to mimic the recipe. 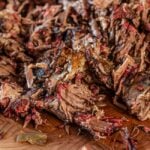 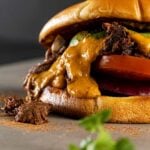