Wrap up a beef tenderloin with salt, spices, and a towel before throwing it directly in the coals and observe the magic. The Lomo Al Trapo is a show-stopping Colombian dish. A wine-soaked cloth covers this salt-crusted beef tenderloin, charred in the flames.

Cooking anything directly on a bed of hot coals is exciting and risky. Now, take a generally expensive cut such as beef tenderloin, wrap it up with salt and a towel and throw it in the coals. Do you trust me?

You should, as the Colombians have been cooking the Lomo Al Trapo for years. The name translates to “beef loin in a towel” so there are no surprises here. Traditionally a cloth of cotton is used, soaked with water, wine (red or white), or beer. The beef tenderloin is then wrapped in a substantial amount of salt inside of the towel, and thrown directly into the flames.

I’m sure you have so many questions, I sure did!

The first time I came across this was on YouTube years ago, someone had been preparing it and threw it onto the logs in their fireplace. Obviously, I had to watch, anticipating a huge flare-up. Worse, the tenderloin could be completely ruined. They cracked it open and sliced, served, and everybody was so excited. Their beef was cooked well-done, but I was inspired to research more and understand how to pull this off.

Turns out this is pretty straightforward, so simple that it’s not even necessary to check the temperature of the fire if you’re timing it right. I have not tested cooking the lomo al trapo in a wood-burning fireplace, only on charcoal grills.

Burning towels seems to be a common concern for most Americans, worried about toxins or particles coming into the meat. The 1/2″ salt crust prevents that from happening, encasing the meat entirely. Purchase hand towels that are 100% cotton with no dye, and you’ll be just fine. I’ve linked the ones I use below, which are very affordable and expendable to the flames:

Beef tenderloin is the only option if you’re looking to prepare the lomo al trapo in the traditional Colombian way. This incredibly lean cut soaks up the flavors from the salt and wood-fire, remaining incredibly juicy when you slice into it. Even if you cook it a little past your target temperature, it’s still packed with beefy flavors.

Whole beef tenderloin can be expensive and require a fair amount of trimming. You can ask your butcher to clean it up for you, which will save you some time and potential mistakes. I’ve also purchased pre-trimmed tenderloins online, which are incredibly juicy if you’ve picked a good provider. Omaha Steaks carries their Chateaubriand which is the fancy name for beef tenderloin. Theirs are wet-aged for at least 30 days, which increases the tenderness as well. Frozen or not, the quality is really nice for convenience.

Yes, that is a lot of salt. You’ll need quite a bit if you’re going to make a salt crust for the entire beef, protecting it from the direct flames that will consume it. The technique of salt baking is nothing new, used for fish, vegetables, and many various types of meat across the world.

Salt baking obviously seasons the meat thoroughly, applied to the beef immediately before you start the cooking process. Salt is also a moisture-sponge, and using it as a thick crust ensures that the juices drawn out of the beef do not evaporate. The flavor vault of salt ensures fairly even cooking as well, insulating the food from hot spots.

One full beef tenderloin will make up an absolutely huge cut of the lomo al trapo, but the challenge is finding a towel large enough for it. Sliced in two pieces, the beef fits perfectly in a majority of small cotton towels, also allowing you to experience the dish twice if you’d like.

I absolutely love it when recipes are incredibly simple and consistent, which is the beauty of cooking the lomo al trapo. The first step is to soak the towel for 20-30 minutes, giving you just enough time to trim the beef and light the coals.

The photos show the towel bright pink, soaked in red wine (used Malbec for this) but it’s not the only option. Aromas from the wine-soaked towel gently perfume the beef inside. It’s also traditional to use white wine, beer, or even simply water.

Lay out the towel after it’s soaked and wrung, pouring out a heavy amount of salt. Sprinkle the salt with recommended spices and roll the beef tenderloin to make sure each side picks up some of those flavors. Put some of the salt on the top of the beef, and carefully roll to make sure it’s evenly coated. Tie up the ends of the towel to form a knot, you may also use butcher’s twine if the towel is not large enough.

Take your carefully wrapped beef present and throw it in. Well, be gentle. Knot-side up at first, which helps build that salt crust on the bottom as it’s a slightly thinner barrier of cloth.

You honestly don’t need to use a probe, but for the picky grillers (like myself) I want to make sure it’s at medium-rare if possible. Carefully insert the probe through the salt crust towards the middle of the beef and check the temperature. Don’t make a second hole if you need to verify more than once.

When the beef is ready transfer the lomo al trapo to a metal platter to rest. I’ve watched people burn their countertops and wooden cutting boards, not thinking about the fact that there are hot embers stuck to the cloth. The beef only needs to rest for a couple of minutes in the salt crust, otherwise, it will continue to cook.

In the moment of truth, you need to crack the charred towel and salt crust to reveal the steaming beef tenderloin. Wipe the sweat off your brow, and take a generous sip of wine. It’s time to eat.

How hot does the fire need to be?

You should have glowing embers, not flames. Light your charcoal in a chimney starter and spread out the coals into an even bed for the towel to sit on. Make sure you have plenty of charcoal, replenish as needed.

Do I have to use beef tenderloin?

I’ve only used it, and that’s the traditional way. I plan to experiment with venison, lamb, and even a pork loin. Don’t be afraid to try, just trust the process and check your temperatures.

Are there other substitutes for alcohol?

The Colombians use water as well, but if you’re looking for some flavors I would recommend trying coffee or beef stock.

Is this incredibly salty?

It’s not overwhelming. Make sure you brush off the salt carefully before you slice into it, and serve with some acidic foods such as salsas. The flavors will brighten the beef. 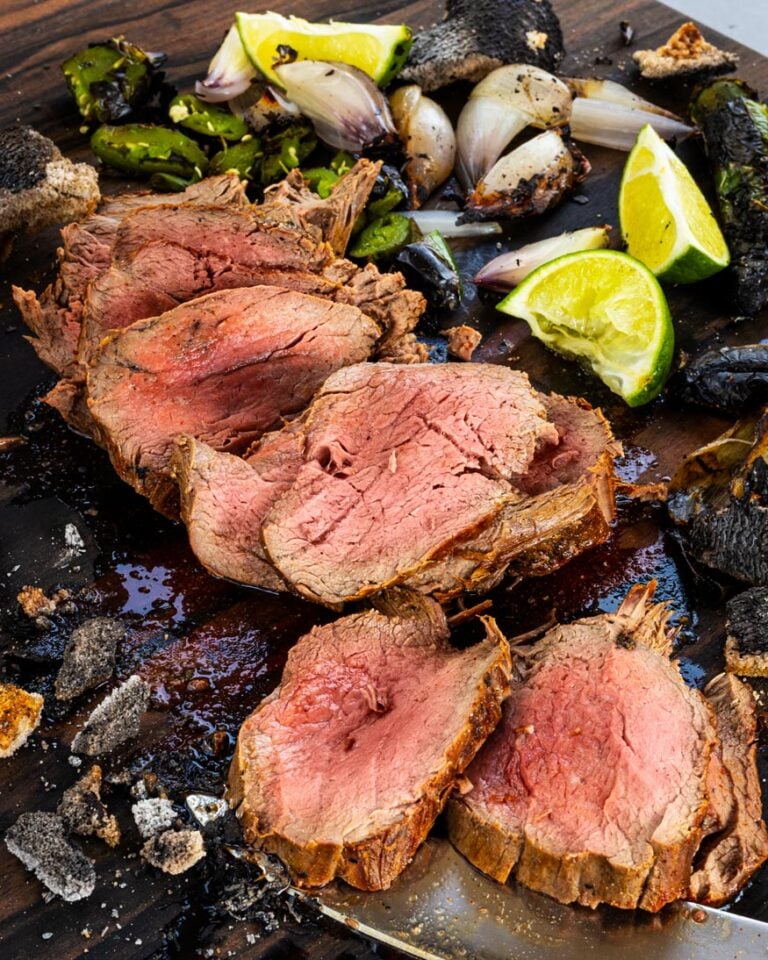 When the beef is ready transfer the lomo al trapo to a metal platter to rest, you don’t want to melt or burn your cutting board. 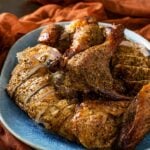 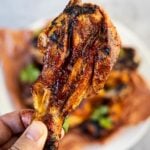