Keep it simple with this authentic marinade recipe for grilled Carne Asada Tacos. Juicy, smoky grilled steak is waiting for your tortillas and fresh salsas. No blenders are required, but you’ll definitely need some beer.

Writing this article and recipe has been a personal struggle. A recipe for carne asada is tricky, as there is no true, single method to grill this flavorful beef. Carne asada marinades are regional, just like the use of tortillas. There are recipes that don’t even use marinades, but a dry brine instead.

Versatile for all cuts. This carne asada marinade will work for all thin cuts of steak, which are covered below in the article.

Quick and juicy meat. Grilling over high heat produces juicy steak in minutes. Fire up the coals and have the beers and tortillas ready to go.

Beefy and bold. Flavors of the marinade focus on enhancing the beef without taking over the toppings. This recipe is based on authentic flavors, with a few additions.

What is Carne Asada?

Carne Asada simply translates to “grilled meat”, which doesn’t describe much. Growing up in Phoenix, you could pretty much order it anywhere. Most of the time it was thinly sliced, seared on a griddle, and wrapped in delicious tortillas filled with pico, guacamole, beans, and sour cream. Fancy places would serve it medium rare, paired with pickled vegetables and fire-roasted salsas.

Carne Asada meat should always taste like beef. Each bite should have some crispy char, the juicy flavors of fat, and the seasoning. The carne asada marinade is typically very simple and minimal. Chiles and sugar taste great with most BBQ, but it’s very easy to go overboard.

The history behind carne asada surprised me. The skinny cows from Spain were brought from overseas, prized for their organs and beef tallow. The thin cuts of meat were seasoned and grilled over the fire, generally served with rice and beans.

Choose your weapon: Which type of meat?

Simply put, anything thin and inexpensive. Here are some of the most common, and most flavorful, cuts of beef for carne asada:

Layering the Flavors in Carne Asada

Simple and flavorful. A good marinade should tenderize the meat and enhance the surface browning. We want crispy textures, juicy flavors!

The most basic of carne asada marinades is lime juice, salt, and pepper. Over the years, soy sauce has become a staple. Yes, even in Mexican culture, soy sauce is commonly found with grilling recipes. Not only does it add sodium, but it also tenderizes the beef. Sometimes you’ll see the addition of fresh chiles, garlic and herbs. It’s easy to keep adding!

My father-in-law is from Chihuahua, eager to show me the ropes years ago. Adding Mexican lager, lime, soy, pepper, and oil was all he needed. Playing with this over the years, I’ve modified it to my flavor profile while keeping it as simple as possible:

Fish sauce? Oh yes. It’s the one ingredient I’ve added over the years for that extra boost of umami, the savory sensation known as umami. Trust me, there are no fish flavors here – you use Worcestershire, right? You’re used to this – just a punch of naturally fermented glutamate. The fish sauce makes the beef taste even beefier.

Fresh-squeezed fruit makes all of the difference. This is a must, so please don’t substitute with bottled juice.

Mix these ingredients together and combine with 2 pounds of your choice of steak – mine is skirt steak – and allow it to marinate for at least 4 hours. Any longer than about 12 hours and the texture of the meat won’t be as firm, so plan ahead.

Carne asada tacos aren’t complicated, so keep the cooking process simple. The steaks need to have a crust, seared quickly to seal in the juices and help retain the moisture. This is not something to pull off in a smoker or a non-stick pan. If you don’t have a grill, use a cast-iron skillet or a griddle.

Cooking over charcoal gives you more options, specifically the ability to use lump charcoal or wood. Additional flavor can simply be enhanced by tossing some wood chips over the embers a few minutes before you grill the steaks. Wood aromas will quickly adhere to your carne asada meat, building another layer of flavor.

High heat is a must, but it also gives you less room for error when grilling steaks. Flip your carne asada meat often, generally every 30 seconds or so, which controls the momentum of the cook and helps you prevent it from burning. This is especially important with thinner cuts such as flap meat or flanken short ribs, which will cook much quicker than a flat iron or hanger steak. Timing depends on the type of steak you’re using. Stay close, tongs in one hand with a beer in the other.

Yes, I have recommended tongs. These Weber Original Tongs are by far the best for larger cuts of meat at a longer distance. The teeth will allow you to grab hold of the meat or veggies without struggle. Nothing is going to slip out and fall on the ground.

What Toppings for Carne Asada Tacos?

Living in the Sonoran desert, we generally stick with flour tortillas for carne asada. Maybe I just started a fight, but that’s a very traditional thing to see in Arizona. Refried beans and carne asada meat pair well together, holding the juices from the steak and salsas in place.

Remember, carne asada tacos are all about the beef. The topping you choose should complement, not overwhelm the beef. Save your off-the-chart spicy salsas for the chips.

Use any type of steak mentioned in the guide, but realize that cooking times will vary depending on what you’re making. Always prepare more than you think you’ll need, minimum 1/2 pound per very hungry person. 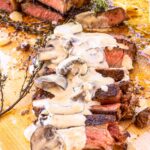 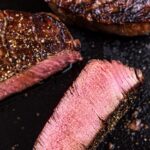 The Guide for Reverse-Searing Steak & Roasts