Simple, bold jerky you can cook with

Smoked carne seca is probably not a type of food you’ve heard of, but hopefully you’ll give it a shot at the end of this post. Each bite is packed with flavors of spicy, salty, and savory. Smoking jerky is a constant struggle to keep up with, as we’re crushing through bags of it. This smoked carne seca is my interpretation on a classic Mexican jerky you can find down here in Arizona and Sonora.

Carne seca is a Mexican dried meat, typically dried in the sun. Don’t forget that it gets up to 120 degrees here! In Tucson there are a few restaurants that prepare it, you can see the meat hanging high in the air contained within nets. They will hang the meat for 3-4 days depending to fully dry it out. There are a lot of variations on spices and styles of preparing it. I learned this version from a family that lives in Brownsville, TX.

Check out this quick video from a famous Tucson restaurant for their version – very different than what I’ll share – but this gives you an idea of the process: Extra Serving: Carne Seca.

Don’t worry – my recipe won’t take you 5 days as mentioned in the video.  This takes about 3 hours max, and it’s packed with flavor.  You’ll have a few pounds of jerky that can also double as a second delicious recipe… machaca. You can definitely use a dehydrator or an oven for my version of carne seca, but it won’t have the same depth of flavor.

The machaca, which I will share a few recipes to use this with, is a shredded version of the carne seca.  It’s ground very fine with a molcajete (mortar and pestle) but you can also use a food processor if you need.  The machaca is a super star ingredient, typically sprinkled in to a cooked salsa, eggs, or beans, and mixed thoroughly as a filling for burritos.  Smoking the carne seca ensures that you have a great bbq smoke flavor throughout whatever you use the machaca in.  You’ll be disappointed – it runs out incredibly fast.

Which beef for jerky?

I like to use eye of round for this jerky.  You don’t want much fat in general when you’re making jerky, and a 2-3 pound piece of beef is generally a perfect amount for the average person to cook.  I’ve seen it used with brisket flat as well, which has a nice pull-apart feel, but most people don’t want to sacrifice a brisket for jerky due to the higher cost.  If you do choose to use brisket, or any other fattier meat, make sure that you trim as much excess fat as possible.

Best options, least amount of fat and easy to slice:

The recipe below calls for guajillo chile.  You literally only will need 1 chile for the entire recipe.  Guajillo is a long, dried red chile that generally had a medium heat and fruitiness to it.  I feel it’s one of the most versatile since it can be spicy & sweet.  If you have access to different dried chiles that’s fine, try it.

After you make this recipe, try making a Machaca Breakfast Burrito next using the carne seca! 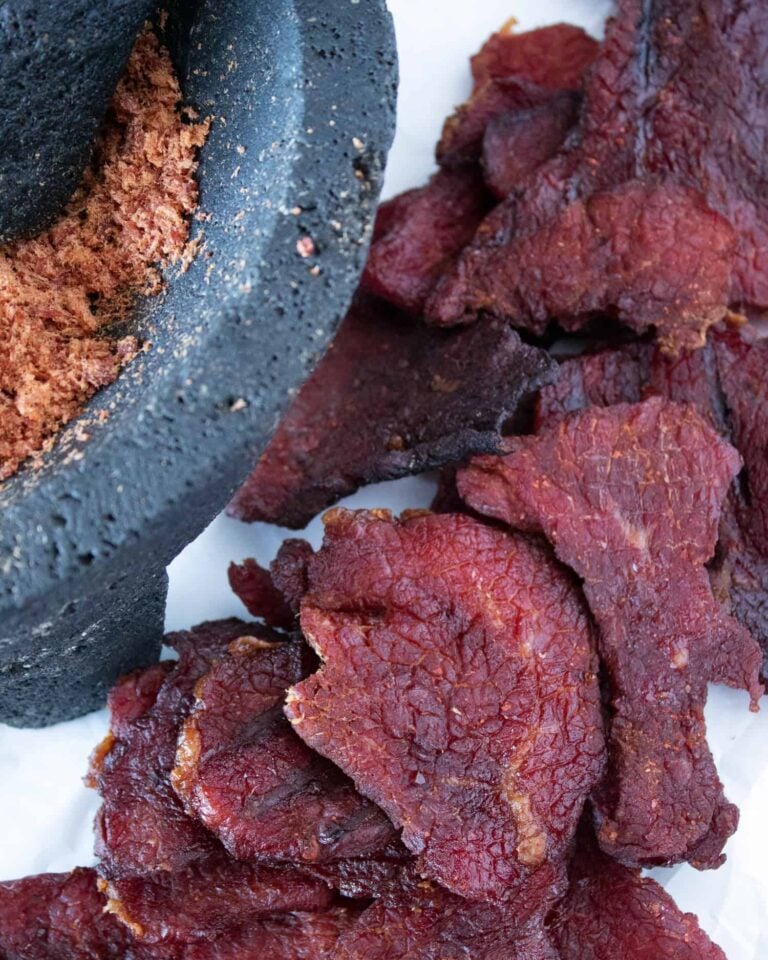 You might have to take off pieces earlier than others. After the 2 hour mark, you better go check the pieces and move them around as needed. Just make sure you don’t overcook! They should still have a little bend to them, not shatter. 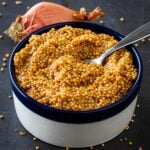 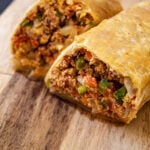