Warm up a big bowl of this award-winning Smoked Brisket Chili, the ultimate comfort food using your favorite BBQ. This recipe is spicy, savory, smoky, and so simple to prepare. Now you have another excuse to smoke too much brisket. Or is it just enough?

This recipe for smoked brisket chili is handy to have on hand, especially for those times you’re needing an easy meal for the family. BBQ flavors come alive inside the house with minimal effort and maximum flavors.

BBQ in a bowl. Smoked brisket chili delivers wood-fired flavors and spice with every bite. You don’t need to cook this pot on the smoker, there will be plenty of smoky beef flavors.

An excuse to cook extra brisket. Leftover brisket sounds like a funny concept to some, but if you’re a small family it’s a very real situation. Don’t be afraid to buy that 15-pound whole packer, now you have another option for the leftovers.

Little prep for a big meal. Dicing the vegetables and bacon are the most difficult steps. Oh yes, did I mention bacon? Setting up the dice takes less than 10 minutes and you’re off to braising.

Make ahead, it tastes better too. Don’t stress about trying to make this meal in time for the family. Chili is always better if it has a day to sit, so make it ahead and eat it when you’re ready.

Everything You Need for Smoked Brisket Chili:

Step 1: Crisp up the Bacon

Take your chopped bacon and add it into a Dutch oven on medium heat. Bacon renders down well if you add it into a pan as it’s warming up, which slowly renders out the fat rather than simply searing the bacon. You will have crispier bacon if you do this.

Cook the diced bacon until it’s crispy, which can take about 5-6 minutes. Using a slotted spoon, remove the bacon and transfer it to a paper towel-lined plate. Leave the bacon fat in the pot.

Once the bacon has been removed there should be enough bacon grease to saute the vegetables. Add in the diced onion and jalapenos to let them soften and sweat for a few minutes first. Stir to make sure they don’t stick to the bottom.

Add in the minced garlic and chopped chipotle peppers next. Stir, and allow them to cook for about 2 minutes. You’ll start to smell some amazing flavors pretty quickly.

The leftover brisket chili is going to start coming alive. Add in the cubed brisket along with all of the spices at once. Dump them in and stir to coat all of the pieces. Stir frequently to allow the meat and spices to toast on the bottom of the pot.

You’ll start to notice that the spices and fats are sticking to the bottom of the pot. That’s fine, the next step will deglaze the bottom and you’ll scrape all of that back into the brisket chili.

Cook the spiced brisket for about 2-3 minutes until you notice most of the liquid is gone.

Hopefully, you read the tips and are using a room temperature beer, otherwise, you’ll have another 5-6 minutes extra to wait for it all to heat back up.

I like to add the beer before the other ingredients to deglaze the pot while burning off some of the initial alcohol as well. Once the beer is poured in, scrape the bottom of the pot to release all of those flavors that were stuck on the bottom. Let the beer come up to a low simmer for a few minutes.

Step 5: Add in the Liquids and Tomatoes

You’re at the finish line, now it’s time to add in the rest of the liquids, plus the fire-roasted tomatoes.

Pour in the black coffee, the juicy tomatoes, and beef broth. Bring the liquids to a low simmer. Stir everything together and make sure the sides are scraped down.

Sit back and wait impatiently, because you’re pretty much done. Just a couple of hours away from delicious smoked brisket chili!

Place the lid on the Dutch oven and keep it at a low simmer for about 60 minutes at a minimum.

After the time passes lift off the lid and check it, stir, taste, and season. Most likely if you add anything, it might be a touch of salt. The recipe below does NOT include salt as a default because of the beef broth, plus the salty smoked brisket. Don’t forget about the seasonings on that bark!

Smoked brisket chili is pretty amazing on its own, but the toppings are the fun part. What will you choose?

Is this considered to be a Texas chili?

No actually, even though it is loaded with smoked brisket. Technically a Texas chili has no beans or any tomato product. It’s made with meat, broth, and thick chili paste made from dried peppers.

Will this chili taste good with beans?

Maybe. If you’re going to add beans, make sure you don’t use small white beans. They will break up and make the chili gritty, adding a funny texture throughout. Adding beans to chili will also demand more liquid for the braise, so be prepared. Personally, I would save the beans for a different recipe.

Can I make a mild version of smoked brisket chili?

Leave out the chopped chipotles in adobo, that’s the main ingredient that builds the heat. You can also leave out the diced jalapenos, though they aren’t very spicy after braising for a few hours.

How can I thicken the chili?

Towards the end, take about 2 tablespoons of the broth out and mix it with a teaspoon of corn starch. Mix it up until the starch dissolves, and pour it back in. Continue to cook and it should thicken it up just enough. The chili will also thicken up overnight as it sets.

Sides to Serve with Brisket Chili 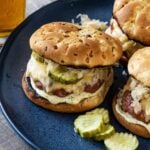 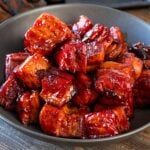