Smoked Pulled Ham has been right under our noses, and you need it. Salty, sweet, and incredibly smoky for sandwiches, tacos, or straight to the mouth. Yes, it absolutely shreds into perfectly juicy strands.

Smoked pulled ham is essentially pulled pork. Instead of using a pork shoulder or pork butt, we’re using bone-in ham shanks. Yes, you too can enjoy this salty, shredded pile of pork along with me.

Think about all of the possibilities: sandwiches, tacos, maybe even burritos. Pile it up!

Shredding ham isn’t a new thing. I discovered the idea when I was early in my quest for new BBQ recipes. You’re lucky, back in my day we didn’t have as many websites to help us along. I referred to Smoking Meat Forums mostly, which is where this idea of smoked pulled ham was first revealed to me. They hadn’t quite figured it out, so it was my turn to attempt. I’ve been working on perfecting this for a few years now and having made it twice again recently, I decided it was time to finally write about it.

How to Choose the Best Ham for Pulled Ham

You’ll likely be at the store wondering which is the right ham for this project? Good thing you’re here because I’m going to answer those.

Absolutely bone-in ham. The fat and muscle structure around the shank and butt allows for the meat to shred very well, also keeping it very moist. There are semi-boneless cuts out there, I have not tested these for pulled ham. Also, you end up with a perfectly roasted ham bone with all of the trimmings to make gravy, soup, or stock.

Spiral sliced or not?

Nope. Stick with an uncut ham. Pre-slicing seems like a neat trick to make it easier to shred, but it’s very unnecessary. It also doesn’t work (I’ve tried) as you’d think. Spiral sliced ham ends up splintering into smaller pieces on the outside, almost like shards. The inside is still very moist, but the consistency is incredible off. Many of the slices also end up falling off prematurely, potentially exposing the inside and drying it out further. You’ll have edge-to-edge moist ham if you stick with an uncut ham.

Buy the shank. Both will taste great of course, however, the butt has a more complicated bone structure which makes it tricker when shredding. The shank also happens to have more fat, which will keep the meat moist and allow it to shred easier.

That’s really up to you. I’m recommending buying ham that is not glazed, which allows you to customize the flavors. I’ve tested it with a pre-glazed ham, only once, and it does work. Personally, I’d prefer to choose my own flavors.

Avoid this, as the “water” can also be solutions with MSG and other chemicals. It’s a way for the manufacturers to inject hams to keep them moist for extended periods of time. The “natural juices” could be extra salt, additives, and even sometimes sugar. The concept is to bulk up the weight of the ham, increasing profit margins.

Here’s a handy guide to keep you informed on the labels:

Preparing the ham for the smoker is pretty simple: Rub it down with yellow mustard and spices. The yellow mustard will impart very little actual flavor to the ham, gluing the spices to the surface itself.

Remember that ham has a lot of sodium, so be mindful of how much you add during the full process. I recommend either making your own seasoning blend or using one from a company that’s typically lower in sodium.

My recommendation is to look at some of the BBQ blends from Spiceology. Their seasonings are extremely fresh and bold, so you don’t have to pile on the spices as you would from many other brands. Most of their blends are also pretty low in sodium compared to what you’ll find, so that’s also a plus. More flavor, less salt.

Here are my top 3 recommended seasonings for Smoked Pulled Ham:

How to Smoke and Braise the Ham

Cooking ham with the combination of slow smoke and braising produces the flavors we desire, and the tenderness we need.

Don’t worry, we won’t submerge the ham in a pot of liquid. One beer is sacrificed for this ham, and that’s it.

Slather and Season the Ham

Rub the ham with yellow mustard on all sides, except for the flat-cut side. This allows for the seasoning to stick. Season the ham with whatever BBQ rub or spice combination that you choose.

Smoke and Be Patient

Smoke the ham for a few hours until it’s at least 165°F. Place a small pan with some water in the smoker for extra moisture if the air is dry, especially during colder months. Moisture will help it shred.

Pull the ham out and place it in a foil pan or roasting pan. Add in 1 bottle of beer, and wrap with heavy-duty foil. Make sure the foil is not hugging the ham closely. Turn up the heat on your smoker to 350°F and place the pan back inside, cooking for a few more hours until it registers around 195-205°F.

Check to see that the ham pulls off easily and that it’s probe tender. Allow it to rest 30 minutes before shredding. I prefer to use black latex gloves over the top of cotton safety gloves, and get my hands in there!

Cured meat is generally tougher, and more resilient than typical meat. Smoking most products such as bacon, pastrami, and ham will add flavor but the meat remains tougher. Pushing the ham past the safe zone towards the 205°F area with the beer braise helps to tenderize the meat, relaxing the muscles and allowing the fat to render further. This absolutely will shred.

Can I substitute the beer?

Yes, you can use any liquid, just make sure you use at least 12-14oz. I’d also recommend using broth over anything with too much sugar, such as juice.

How long is it supposed to take?

Hams can vary in size from 6-12 lb depending on the cut you purchase, so the times will greatly vary. My estimate is 7-8 hours, but it could be longer. If you’re worried about timing it perfectly, smoke the ham the day before your guests arrive. It’s perfect as leftovers. 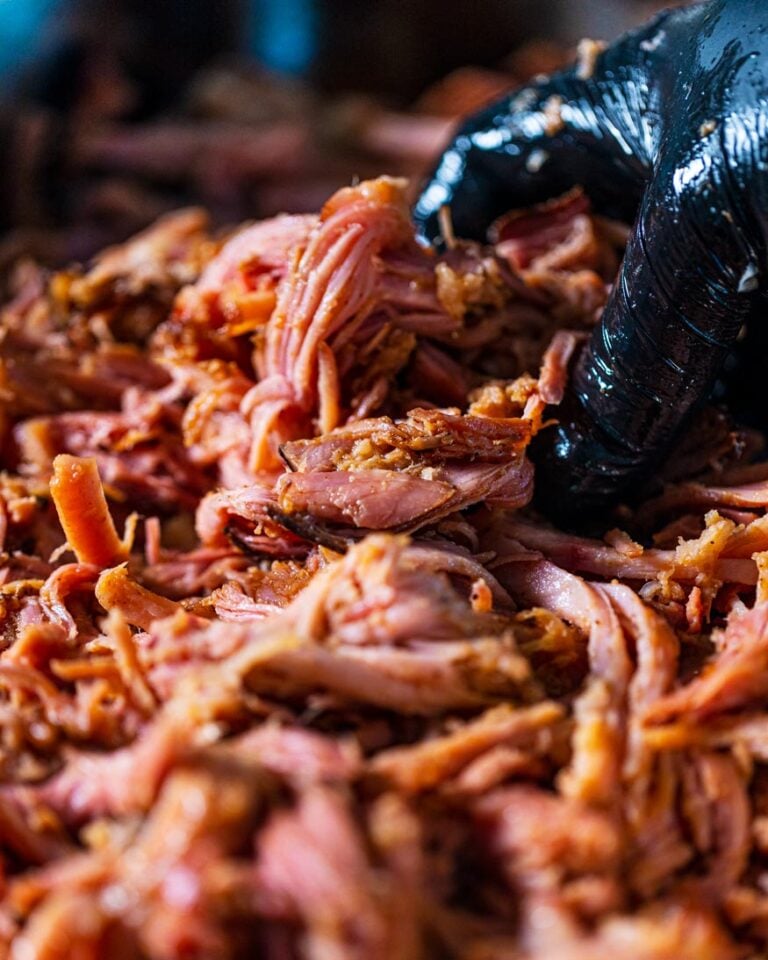 The time will vary depending on the size of the ham, so use your intuition. Don’t be afraid to cook it longer. If you think you don’t have enough time for your guests to eat, prepare it the day before. 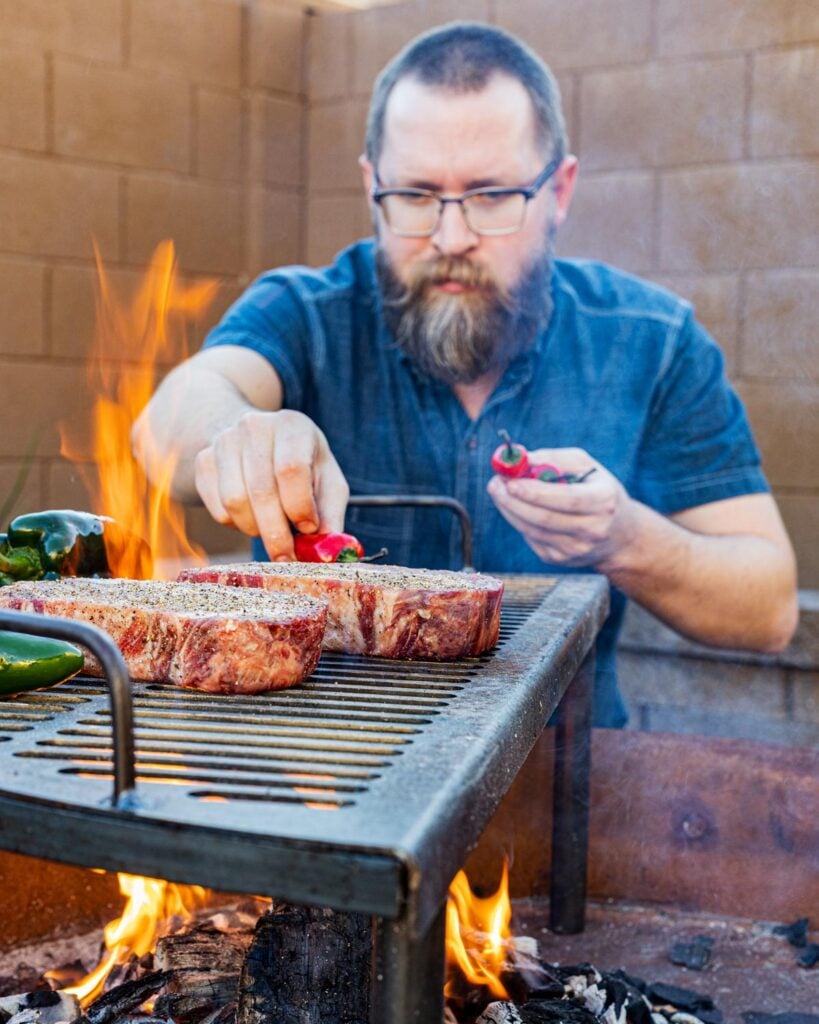 Hello! I’m Brad Prose, a home chef that wants to inspire people to try bold flavors over the fire, using a combination of simple and advanced techniques to keep you excited about grilling and smoking food.