This Smoked Bacon Jerky is spicy, sweet, and absolutely impossible to stop eating. Oh, you don’t believe me? I dare you to make some. Do yourself a favor and buy a few packs of thick-cut bacon, you’re going to need them.

There’s no question that I really love bacon. I’ve certainly created a few recipes celebrating bacon such as wrapping pickles and little smokies, but the smoked bacon jerky might be the best. Or worst, if you have a problem with bacon restraint. I’ve definitely shown my weakness during the process of recipe development here.

Bacon jerky is a cousin of candied bacon, same family, but they have very individual personalities.

Candied bacon is cooked in the same way as traditional bacon, but with the addition of brown sugar. One of the most popular recipes on the web from Food & Wine shows you can simply make it in the oven at 400°F. You’ll have nice, crisp bacon you can chop up for pretty much any topping you’d like. It will be crisp, sugary, and greasy.

Bacon jerky takes that theory and amplifies it. The concept of jerky is to dehydrate cured meat, preventing bacteria growth and allowing the meat to have a longer shelf life. Drying out the bacon in the smoker or oven will do just that. You’ll have a snack that can definitely last for days, stored in a cool, dark place until you’re ready to enjoy. Which will be all the time.

The texture of bacon jerky is what you’d expect: slight crisp, perfect chew, not stringy. Candied bacon tends to be stickier, and tends to shatter due to the crispiness. Each of them has its place in the kitchen, but today we’re focused on the longer-lasting snack.

Thick-cut bacon gives the best results. It’s an ideal thickness for jerky, but it’s also much more consistent when smoking. You can pull it off with traditional bacon, but times will definitely vary, and you’ll need to be watching it much more closely.

Skip the premade BBQ rubs. Bacon is cured already, so it’s loaded with sodium. If you’re looking to add another layer of heat or spice, feel free to add some of the ground spices into the mix. I’ve had success with chipotle powder and fresh ground black pepper.

The glaze below is super key for creating that shiny, sugary coating encapsulating the delicious smoked bacon. BBQ rubs will likely have a form of sugar as well, so read the ingredients carefully if you choose to use one.

Mixing the 3 ingredients will create just enough of a glaze for a very thin coat. Trust me that’s all you need. There’s plenty of spice and sugar in each bite, and you won’t have a sticky mess at the end.

If you feel that this is too spicy, adjust the ratio of Dijon to Sriracha accordingly. The Dijon is not overpowering and gives the smoked bacon jerky this honey mustard profile, which is crazy delicious.

How to make Smoked Bacon Jerky

Can I use other sweeteners?

Yes, but if you’re using a liquid sweetener such as honey, maple syrup, or molasses I would use a little less than 1/4 cup of brown sugar from the recipe. The key is the thickness of the glaze, so try out different combinations and see what works for you. 1/4 cup of molasses is incredibly strong and sweet, where 1/4 cup honey is much milder.

Can I use a dehydrator?

Probably. I have not tested this out, but if I were going to I’d likely smoke the bacon for 2 hours, blot it, and then add it into a dehydrator. It would take much longer to dry out in a dehydrator, closer to 4-6 hours overall.

I don’t like spicy, can I still make this?

Absolutely. Try a thin glaze of your favorite sweet BBQ sauce. Whatever you choose to use, make sure to pay attention to the added salt.

Can I use an oven to make bacon jerky, knowing it won’t be smoked?

Yes, you absolutely can make bacon jerky in the oven. Make sure you set the oven to 200 °F for the entire cook. Use a wire rack with a baking sheet underneath to catch all of the grease coming off. The baking pan from USA Pan is a perfect example, also large enough for quite a bit of bacon.

I’ve tested that it stays fresh and crispy for at least 10 days. Good luck keeping it past that point, everyone will likely consume it all much quicker. 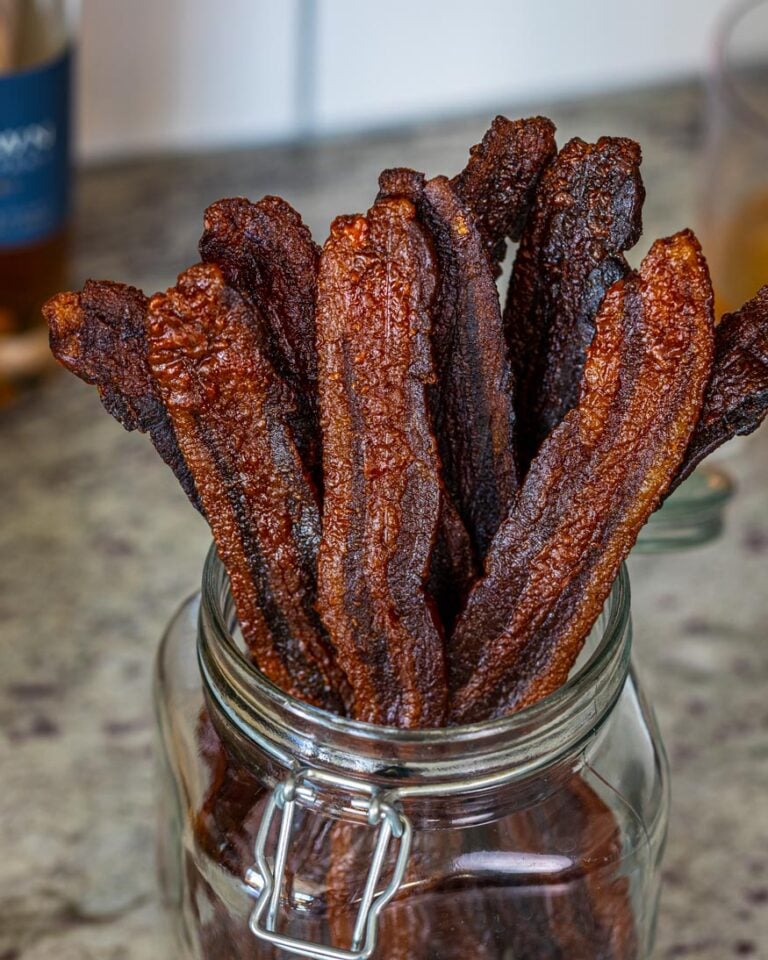 You can use an oven at 200°F as an alternative. Make sure you use a wire rack with a baking sheet underneath to catch the grease. 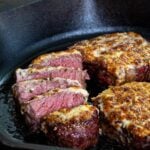 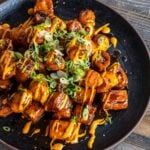