Studying global barbecue and grilling inspires so many new ideas. This technique is influenced by Japanese cuisine, opening up a new thought process for grilling. Triple-seared steak is exactly what it sounds like: Searing 3 different times, layering flavors while creating this savory juice bomb.

There are a few chefs I’ve observed using this technique over the years. The first I came across was chef Aaron Patin, where he triple-seared steaks on a local morning show. Curious, I researched the process and the ties to Japanese BBQ. The process intrigued me, seeing how meats are glazed, seared, and glazed more with different flavors. Layering sweet, sour, and savory together creates this complex profile with few ingredients. I had to test it.

Why triple-searing steak is a good idea

You might feel this is unnecessary. Let me compel you to try it. Here’s a few solid reasons:

There really aren’t any hard rules for the triple-seared steaks other than avoiding a massive cut, such as a tomahawk steak. I recommend steaks no thicker than 1″ unless you’re cooking a filet mignon.

The higher the quality, the better the results you’ll have. Cheap cuts will not be as tender, and this process really does favor nicer quality. Try to buy Prime or Wagyu (not A5) if you can, falling back on heavily marbled Choice as a last result.

Top choices would be:

Skirt steak doesn’t make the list, as I’ve found that it simply cooks too fast for this process. It’s not possible to generate 3 levels of searing at the same level of depth you’ll get with the other cuts.

Let’s talk about the process!

The process for triple-seared steaks

This is an easy setup, you’ll just need to have everything ready to go. Make sure you’ve got a room-temp steak and a very hot grill, ready for searing!

Do not use a skillet, griddle, or flat top. You need a live fire to replicate this technique. Charcoal, lump charcoal, briquettes, or firewood are recommended.

These are estimates, and may vary if you’re using larger steaks. Ribeye steaks, for example, might take more of everything.

What do I eat this with?

I recommend anything that has some Eastern Asian flavors, if you’re using Japanese whisky and soy sauce like I recommend.

Highly recommend picking up some sansho peppercorns. They are lemony, herbal and spicy without any salt. They are Japanese peppercorn with a very strong citrus flavor that hits you. You can pick up a small jar here:

This would also taste delicious with a side of Kimchi Potato Salad. Or… the grill might still be hot after you make those steaks, so throw on some miso-glazed eggplants, mushrooms, or sweet potatoes. I like to use all of them, along with some ginger to create a complete meal like below. 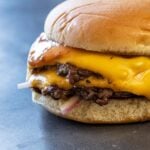 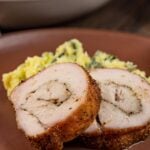