Step out of your comfort zone with fresh Steak Aguachile Verde. Rare steak served with a citrus marinade, flavoring and tenderizing the meat. This bold dish is packed with summer flavors that will wake up your tastebuds. Grab a fork, chopsticks, or tostadas and dig in.

Beefy spin on a classic

I’ve become addicted to eating aguachile. Fresh flavors with quick prep make this style of food the ultimate, lazy summer meal. The simplest way to describe aguachile would be that it’s a dish similar to ceviche, but it has a marinade for the meat and is typically served right away. Seafood is usually used, such as scallops or shrimp. There are many different kinds of marinades, the most common is aguachile verde (green chile water).

Beef is not the obvious choice for aguachile verde. This was a tricky one to pull off, and I admit to having quite a few failed attempts. Ultimately the goal here was to have extremely rare beef take on the bold flavors of the chile marinade.

After trying a few methods, I looked to Japan. There’s a famous dish called beef tataki which uses the principle of searing the beef quickly, allowing you to have a nice contrast between the crust and the tender inside. It’s dressed with a ponzu sauce and served immediately. The main difference between tataki and aguachile is that the ponzu sauce does not continue to cook the beef. You would need extremely high quality beef to enjoy tataki as it’s mean to be served.

Quality and cut of steak

We’re not serving this steak rare, or raw. It will be seared to rare and then gently cooked a few steps further with the high-acid marinade. Tender, juicy, and still just as beefy.

Types of steak I would recommend would be anything that’s not too thin, tougher, and too marbled. Top recommendations would be:

Ribeye steak would need to be well-marbled, and of higher quality than average. Thick bands of fat would not render down properly during the process, so I would recommend a well-trimmed NY Strip as a second choice for fat content.

Pictured above are 2 Butcher’s Cut NY Strips from Omaha Steaks. These are their thicker cuts, about 25% thicker than typical NY Strip steaks. Expertly trimmed, the fat is minimal but well-marbled, providing a great balance of fat and lean meat.

Let’s break down the extremely quick process. In 20 minutes you’ll be ready to eat. The hardest part is chopping the veggies for plating, which will probably take you a few minutes.

Rare is the key

This steak aguachile verde is the first, and only, rare steak recipe on Chiles and Smoke. Generally, I’m a medium-rare kind of man, but for this recipe, it’s extremely important to keep it undercooked.

The extremely potent marinade will be absorbed into the steak, also tenderizing it and cooking it further. Testing the recipe with medium-rare, and medium steaks with varying times of marinating produced tough, chewy steak. Leaving the steak rare, in the style of beef tataki, was the best result.

The aguachile verde is quite strong, pulling in some influence from the tataki recipe. Traditionally, tataki uses ponzu. Replacing it with orange juice and lime juice, the marinade uses the flavors of aguachile verde. A touch of soy sauce brings salt and umami to the table, tying in the beef to the citrus as well.

How do I eat this?

Aguachile is served similar to ceviche, with chips or tostadas. Paying homage to my Japanese influence, we served ours with chopsticks. Don’t stress, whether you’re eating with crispy corn shells or popping it straight into your mouth, this steak aguachile verde is going to blow your tastebuds up. In a good way. Promise. 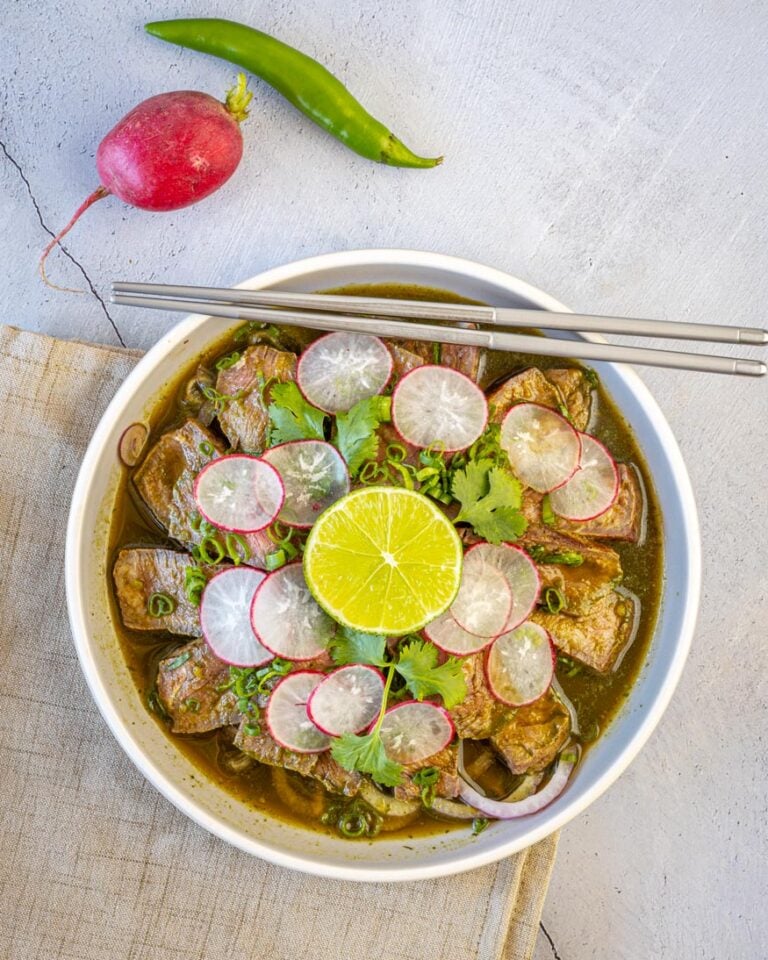 These portions would serve up 2 plates as shown in the recipe. Halve the recipe if you’re serving just 1 plate. 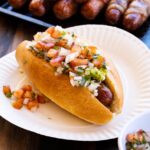 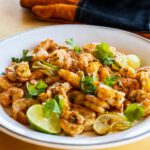