Grab a hold of these Grilled Barbacoa Lamb Chops with boozy salsa borracha. Complex flavors, but very simple to throw together on the grill. Plus, you get a bowl of salsa. Who doesn’t love that?

There’s no secret that I’m a huge fan of barbacoa-inspired dishes. Combinations of chiles, herbs, and aromatics with wood-fired meat hit the spot every time.

Traditional barbacoa involves meat, typically either lamb or beef depending on the region, slowly braised for an extended period of time. Large, tougher cuts are generally cooked slowly in pits dug into the ground. Many home cooks in Mexico have converted the recipe to slow cooking indoors, and the way it’s served has changed over time too.

I’m not in a position to dig holes in my backyard either, so I’m firing up the grill for some barbacoa lamb chops, inspired by the real deal.

Bold flavors, not gamey. The fresh marinade removes most of the gamey lamb flavors you’d expect, while also tenderizing the meat. You’ll taste each bold ingredient with every bite.

You get salsa. In testing I realized the ingredients were just a few steps away from a version of salsa borracha, so the marinade was doubled to account for that. Having a fresh salsa really brightens up the grilled lamb chops.

Simple process. Charring the tomatoes and onion might be the most difficult part, which gives you both the marinade and the salsa. Overall this is a very minimal-effort dish.

Everything You Need for Barbacoa Lamb Chops:

There are two parts to making the salsa, both are pretty simple though.

First, you’ll want to hydrate the chiles, which should be dried guajillo and ancho chiles. Pour very warm water over the chiles once the stems and seeds are removed, and allow them to hydrate for about 10 minutes.

Next is to char the tomatoes, garlic, and onion. You can do this on the grill, which is easy if you’ve got a gas grill (no need to light charcoal). Alternatively, turn the broiler on in your oven and roast them on a baking sheet for about 5-7 minutes, until lightly charred.

Remove the skin from the tomatoes and the charred garlic husks. Blend everything together (minus the tequila) for the marinade and season to taste.

Trim any excess silverskin or fat on the outside of the rack to clean it up. Break down the rack of lamb into individual chops. Use a sharp chef’s knife to slice between the bones (see the image below).

There might be small bones protruding from the meat that can be easily removed. Feel free to pluck those out if you’d like.

Season the individual chops lightly with kosher salt on both sides. Doing so will ensure they are properly seasoned. Even though the marinade does have salt, through testing, this step makes a significant difference.

Place the lamb chops in a resealable plastic bag and pour in just enough marinade to completely coat the lamb chops. You should have at least half left over. Don’t pour everything in, or drop the lamb into the marinade. We want to save some for the salsa!

Allow the lamb chops to marinade for at least 4 hours, up to overnight. Don’t go past 12 hours, otherwise, the acid may break down the lamb too much and change the texture.

Take the extra marinade and pour it into a medium saucepan.

Add 1 tablespoon of tequila, and turn the burner on medium-low. The salsa will heat up and start to sputter, so be mindful of the mess. Stir occasionally and cook the salsa down for about 20 minutes, and adjust with salt to taste.

A little note on the type of tequila here. Use an aged tequila if possible, which adds a little more complexity to the salsa instead of a tequila blanco. I recommend using reposado or anejo which are darker in color and tend to have more flavor notes.

Enough prep, it’s time to fire up the grill and get it done.

Remove the lamb from the marinade and brush off some of the excess. Preheat the grill (gas or charcoal) for direct searing at medium-high heat.

Grill the lamb chops for about 2-3 minutes per side directly over the flames. Keep flipping to develop char, and cook until the desired temperature. For a medium-rare, remove the lamb chops around 128-130°F and allow them to rest.

Grill up the lime slices as well for a couple of minutes. Trust me, it’s the ultimate finishing move for this dish.

Anything related to Mexican food will work well here. I’ve found that because the barbacoa lamb chops are pretty lean, adding some dishes that have fat will make this a well-rounded meal. 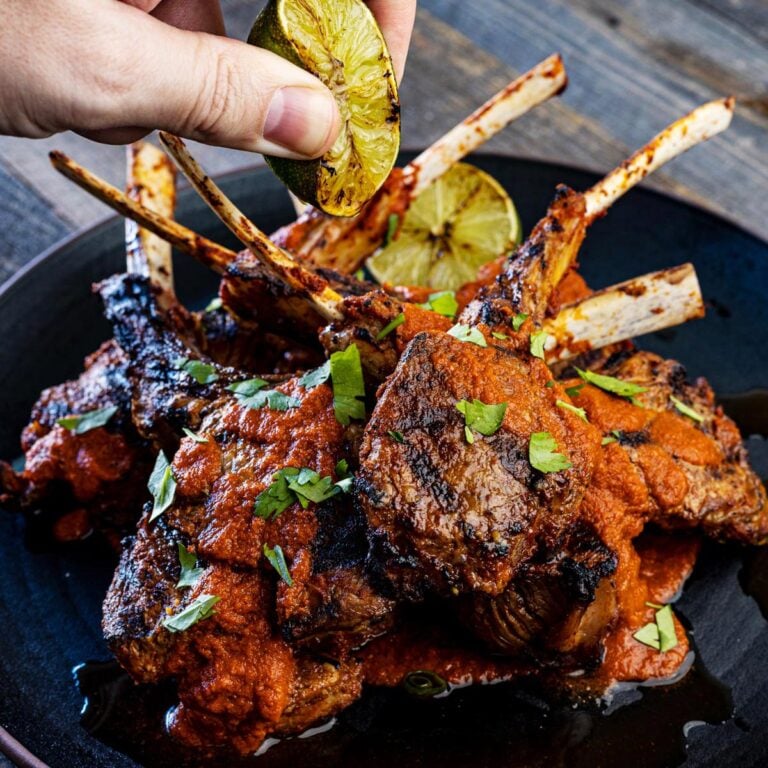 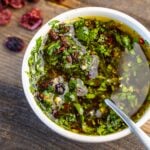