Turmeric & rosemary might not be the first thing you think of when pairing flavors with beef, especially a tomahawk steak. The smell off of the grill is intoxicating; the aromas of that rosemary, garlic, and spices… then you baste the steak with butter… OK, now I’m drooling as I write about this.

Recently I was given some new spices to try from Wildwood Grilling, and wanted to make this post to highlight the most surprising one which is called Hippie Gold Rub.  Obviously, the highlighted ingredients are turmeric and rosemary, but garlic and other spices explode as well, creating a unique flavor bomb that really surprises you.

Let’s talk turmeric, because we already know that rosemary is amazing on pretty much any roasted surface of meat.  Turmeric is a root that looks similar to ginger, but tastes wildly different.  It’s pretty trendy right now due to it’s medicinal benefits but… that’s not why I put it on a steak. I would describe it as slightly bitter, earthy, with a slight taste of mustard.  On it’s own it will probably make your cringe, but when paired with the right combination of spices it completely enhances the natural flavors of the proteins it’s bonded with (beans, chicken, lentils, and beef of course).

You’ll find it mostly in flavors from different types of cooking in Asia, obviously more common from India.  I love to pair it in coconut milk for a stew, so I used that in part of the vegetables for the overall recipe.

I’m so glad you asked! Well, first it starts with a quality tomahawk steak. You can absolutely make this recipe with any steak, but we’re talking about the show-stopping, bone-in beast of a steak.

I get mine from Omaha Steaks, they come in a 2-pack (You’ll want 2). They are vacuum-sealed and wet-aged for a delicious flavor. Allow them to thaw in the fridge before preparing them for the best results. Did I mention they are 36 oz?

TO COOK: Check out my Guide for grilling the perfect tomahawk steaks. This will give you the overall tips, we’re going to use that process and a little love with vegetables to prepare a full meal. 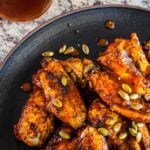 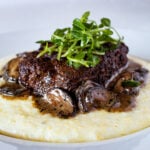